Dr. Wily And The Robot Masters 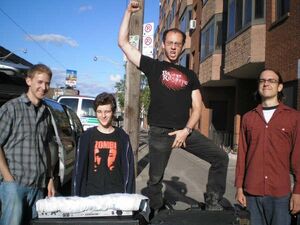 Dr. Wily & The Robot Masters was formed by Pete and Steph in late 2001, they were later joined by a very drunk and impressed drummer named Timaaahhhh! Dwayne Sustaine was recruited as co-lead-guitarist. Unfortunatly due to undisclosed incidents, Dwayne Sustaine was ejected from Dr. Wily. Since then he has formed a rival rock band called "SegaDeth". The line-up was then finally completed with the addition of a 2nd geektarist known as Fatty (also known in Japan as Godzilla). They are an Ottawa/Orleans based Nintendo music cover band, thats right, they play the music from the video games you used to play when you were a kid. Yes its geeky, and yes, they love it. Almost as much as they like writing about themselves in the third person.

Community content is available under CC-BY-SA unless otherwise noted.
Advertisement